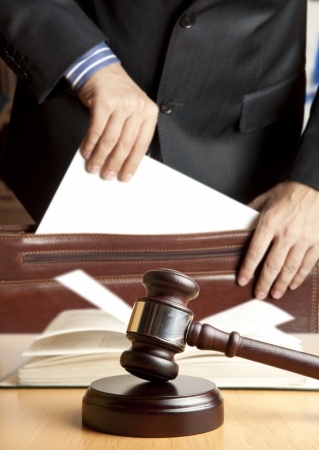 There will be time in a lawyer's career when he or she is split between what they should do, and what has to be done. In some cases the lawyer will know that their client is in the guilty, yet legally they must fight for them to ensure their safety. As with many other fields such as health and education, personal feelings may cloud judgment which goes against the policies of their profession. An attorney may be called upon to defend a convicted murder who can't afford their own defense, or their client may accidentally say too much which changes their personal perception. Regardless of the topic or nature of their case, each individual within law is responsible for making their own educated decisions on balancing ethics and the law.

What Should a Lawyer do When an Inmate Seeks Death?

In a case in 2008, public defender John Delaney faced an ethical decision that he was trained to prevent even though it went against the wishes of an inmate on death row. The inmate, Marco Allan Chapman, was a convicted murderer set to be executed that week. Chapman requested that Delaney drop the appeals so he could die by lethal injection. Delaney was opposed to it, both as a lawyer and as a sympathetic human, and pleaded with Chapman to fire him so another attorney would be assigned. Even though as a lawyer, Delaney should grant his client's quest he still refused to drop the plead in hopes Chapman would survive.

Prove Someone Innocent or Win the Case?

In a rare case where a lawyer broke client-confidentiality, North Carolina lawyer Staples Hughes testified against his own client in order to prove a convicted murderer innocent. Hughes said while on trial that his client (who committed suicide before this) confessed to the murder for which another man was serving life. The Judge Jack A. Thompson urged Hughes not to testify saying that his law license would be in jeopardy, ethically he felt required to speak on behalf of the factually innocent.

Helping Someone Break the Law or Finding Loopholes?

Devoting their entire life to the legal system, lawyers know how the law works, how to use it, and where there can be loopholes. Washington State has taken some steps towards legalizing marijuana, but there are still some complexities when deciding who can use it and what it takes to make it legal for them. Kurt Boehl is an attorney in Seattle who has been telling his clients how to get through the messy marijuana laws. Boehl says that as long as he doesn't lie and actually tells his clients what the laws are, then when he tells them what to do to get around the laws it is completely justifiable. Is there a line between breaking the law and getting around the law?

Why Would Someone Defend the Guilty?

Every person convicted of a crime is entitled to a lawyer and will have one provided should they be unable to afford one. Even though there are some lawyers who only try to protect those being charged with a crime because it's their job, some lawyers take it as a challenge. Abbe Smith has had multiple cases where she chose to defend murderers, stating 'I like guilty people, I prefer people who are flawed and complicated." There will be times where a lawyer will be expected to defend a client even though the odds are against them, but that's why lawyers must find a balance between ethics and textbook law knowledge.

Many problems that those in law (and other fields) face are dilemmas of ethics and their code of conduct. There are instances where a person may ask themselves "Do I want to go against what I believe in?" only to follow what a book says they should do. Depending on the case, there will be times where choosing what is ethical may actually be favorable, but it may mean risking their law license and their job.