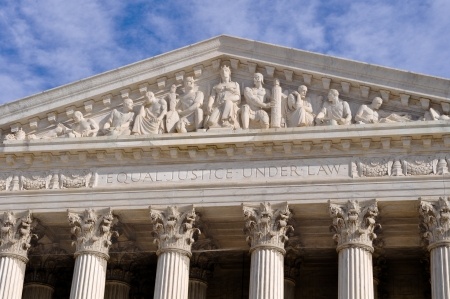 Every other court in America has to follow whatever decisions or rules that the U.S. Supreme Court justices make. The Constitution gives our Supreme Court the right to judge whether local, state, and federal governments are following the law. This court also has the power to decide whether or not the president has made an unconstitutional action. Anything the U.S. Supreme Court decides is final, however, any judgments made in any lower courts can be questioned or appealed, The U.S. Supreme Court receives thousands of ruling requests every year but less than 150 of those are considered and decided upon.

Every year, lawyers in the thousands, from all around the country, visit the Supreme Court of the U.S. in hopes to plead their case. Those cases considered to be the most important are the only ones that are ruled on. The important cases tend to be any concerning civil rights and basic freedoms which are protected by the U.S. Bill of Rights. There are times when the decision that is made by the court is so important, the entire country pays very close attention the ruling. In 1954, the U.S. Supreme Court ruled that racial segregation (separating white and black people) in the public school system was unconstitutional. The outlawing of this type of school separation was written by Earl Warren, the Chief of Justice. This decision affected schools all around the United States and this one decision helped pave the way for other laws regarding civil rights being passed in following years.

There have been many very important cases throughout history. Plessy vs. Ferguson was a case that addressed racial segregation. Miranda vs. Arizona was a case in which the Supreme Court ruled that any person who is a suspect of a crime must be told about their rights before police officers can question them. One of the most recent Supreme Court cases is the national Federation of Independent Business vs. Kathleen Sebeliu, Secretary of Health and Human Services case in which the Supreme Court sided with the president's health care law. Visit our criminal lawyer to learn more about the supreme court and important cases.